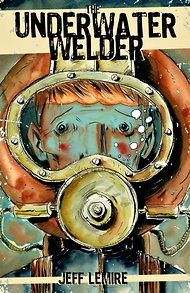 This
week in welding we find that a welder made it onto the bestseller’s list… sort
of.

New
Graphic Novel—Underwater Welder: According to the New York Times, “The
Underwater Welder, by Jeff Lemire, enters our graphic books paperback
best-seller list at No. 6 this week. It’s about Jack Joseph, a man feeling
pressure because of his deep sea welding gig and the fact that he’s going to
become a father. The introduction to the book, by Damon Lindelof, one of the
creators of ‘Lost,’ compares it to ‘The Twilight Zone.’”

Welder
Becomes Crew Chief for NASCAR Driver: A former NASCAR driver had a backup
plan. He is also a certified welder. Today he’s the crew chief for a winning
NASCAR team.

Self-Taught
Welder Builds Her Own 1924 Model-T Ford: “Shannon MacDonald is quite a sight
cruising the 1924 Ford Model T street rod she built herself with pieces
collected over a five-year period. Reminiscent of the hot rods from the 1950s,
the cut-down Model T roadster pickup has a 420-horsepower Chevrolet V8 motor and
five-speed transmission.”

Miller
Announces Results of Welding Hero Competition: According to the Miller
website, “After more than 11,000 online votes were cast, three welders have been
voted the winners of the everyday welding heroes in the campaign. The winners
include a 70-year-old grandmother, a contractor keeping the military fleet safe
in Afghanistan and a former corporate manager who chose to become a welder.”

Community
Colleges Meet Demand for Welders: According to a Cleveland Business
Newspaper: “Northeast Ohio’s community colleges are planning to churn out
hundreds of highly trained welders to meet an intense demand for such workers
brought on by a rebound in American manufacturing and a pending wave of baby
boomer retirements. Cuyahoga Community College and Lakeland Community College in
Kirtland are upgrading their training labs with the latest technology and
tweaking their programs’ curriculums to meet the evolving needs of an industry
requiring a better-educated work force.”

Kennesaw,
GA School Trains Welders with New Program: “The school will begin offering
the 15-week class to students later this month, after it receives its
post-secondary license from the state. Classes will be held Monday through
Friday, 35 hours per week. Open welding labs will be held at night.”

Union
Receives Grant to Train Pipeline Welders: According to Vindy.com, “Plumbers
and Pipefitters Local 396 leadership announced today the union had received the
grant from the Appalachian Regional Commission to train pipe welder for the
burgeoning oil and gas industry.”

Welders
Are in High Demand Throughout North Dakota: “According to Job Service North
Dakota, there are 61 job openings for welders, cutters and welding fitters
listed online in the state, with 28 of them located in Cass County, four in
Grand Forks County and two in Walsh County. Job Service projects the number of
positions in the category to grow by 112 jobs a year, split half and half
between growth coming from job creation and replacement of workers leaving their
jobs.”

Machine
Welder Killed in an Explosion: A welder was killed after a gas tank he was
working on exploded.

Boat
Fire Potentially Caused by Welder: According to South Coast Today, “Fire
Chief Michael Gomes said it’s possible that the blaze was caused by welders, but
officially he said the cause and the point of origin remain under investigation.
There were no injuries reported in the fire.”

The post Weekly Roundup – News in the Welding World appeared first on Weld My World.